I hope everyone had as wonderful a Mother’s Day as I had! I have to say, this has been the best one I’ve had in years! It was SO nice to have Tucker here. The REAL Tucker! Not the spun out version. The one who laughs and acts like he sincerely wants to be with us. Our sweet, honest, loving, appreciative son. The Tucker we all enjoy being around.

The last Mother’s Day I remember spending with Tuck, and I use the word spending very loosely, he and his girl friend stopped by the restaurant, where Steve and I were eating, and gave me a present.

I have to say, my heart was broken. Sure, I was impressed with the gift. They gave me a Nook, which I’d been wanting! Plus, it’d been years since he’d actually thought to get me anything. However, what I really wanted was for him to want to be around us, and to know that he loved me. Back then, it sure didn’t feel like he did.

BUT, I took any, and every opportunity I had to brag on my son! I might not have had my picture made with him on that Mother’s Day, but I sure did make a picture of my new Nook and plaster it all over Facebook! A couple weeks later, I’d wish I hadn’t done that.

After registering my Nook, I was all ready to start ordering books! There was a couple I was wanting to read, and I couldn’t wait to read it in the new, high tech way! I was “keeping up with the Joneses” thanks to Tucker. Or was I?

After completing the registration process, I received an email from Nook. I opened it, figuring it had something to do with the registration. Um, NO! Much to my surprise, they were informing me that my Nook had been stolen! I was terrified! For the love! Was I going to be arrested?! I mean, anyone could say they’d gotten it as a gift! They might not believe me! Do I email them and tell them it was Tucker?! I was PO’d, to say the least! HAPPY FREAKIN’ MOTHER’S DAY TO ME!!

I ignored the emails, put my Nook back in the box and stuffed it in a drawer. Yes, I confronted Tucker. He said he’d bought it from someone who’s stolen them. However it had come about, I was humiliated! I had bragged to the whole world on Facebook for crying out loud! That’ll teach me to brag huh?

Maybe we have a twisted sense of humor, but that’s funny! At the time, we seriously wanted to kill him! Now, we can laugh. We laugh because, how stupid to give someone something, that you have to register, that’s stolen! We laugh at the whole situation. At how my bragging backfired, and just picturing Tuck crapping his pants when I confronted him. Mostly though, we laugh because we know how badly the devil wants to win, but he won’t!

This Mother’s Day was proof that God is in control! He’s got more work to do indeed, but my God never sleeps! He never fails! He answers a broken hearted mother’s prayers. He finishes what He starts, and the enemy WON’T win this battle, because it’s already been won! Amen!

I didn’t get a store bought gift this Mother’s Day, but the gift I received was far better than anything that can be bought; and I KNOW it wasn’t, and can’t be stolen!

Thank You Lord for keeping Your righteous right hand on Tucker when he was out in the world. I thank You in advance for protecting him in the future. I pray that You’ll place people in Tucker’s life who will speak truth and life to him, and I pray he’ll listen! Father, give him eyes to see You, ears to hear You, and a heart to feel You! Remove things from his life that need removing, and replace it with things of You! Thank you for the wonderful day spent with my family. You’re an awesome God! Sorry, no proof reader today! Ignore my bloopers!

fear not, for I am with you; be not dismayed, for I am your God. I will strengthen you, I will help you, I will uphold you with my righteous right hand. Isaiah 41:10 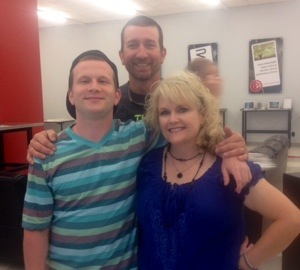