Breaking news! This world has gone crazy! There’s plenty of examples, I could use to support my theory, but if I listed them all, surely I’d win an award for the longest blog ever written!

The one thing that kills me is the amount of plastic surgery that’s taking place. Don’t get me wrong, I’m not above having a little “work” done myself! I’m just saying that people have got to find a stopping point!

As I was sitting in the Miami airport people watching, I started noticing that most women had, most likely, had some form of cosmetic surgery. Naturally I noticed lots of fake boobs. I saw a few over-botoxed foreheads. You know, those who constantly look surprised? I mean, one lady was crying real tears, yet her expression never changed! There were a few with semi-circle, tattooed eyebrows; but those could’ve been drag queens; I’m not positive. I saw lips that I KNOW were never supposed to be that big! The thing I saw that got to me the most, and what seemed to get every other person around me, was the little, bitty, young lady with the incredibly, ridiculous butt implants!!!

Ok, again, I’m not above having some work done on this body of mine, but people!! Come on!! This butt would make Sir Mix-A-Lot retract “I Like Big Butts”!! There’s no way the jeans she was wearing were actually made out of denim. I mean, there’s stretchy denim; but there couldn’t possibly be any that could stretch that much! Maybe they were rubber, denim pants, or solid elastic? It’s mind boggling because they fit well all over.

I, and many others, stared in amazement as she walked by. I couldn’t take my eyes off long enough to get a picture, dang it! Some people were laughing. Personally, I just couldn’t believe anyone would want to look like that?!? What the heck?! It’s one thing to not have a flat butt, but for the love!! This is what it looked like ⬇️. 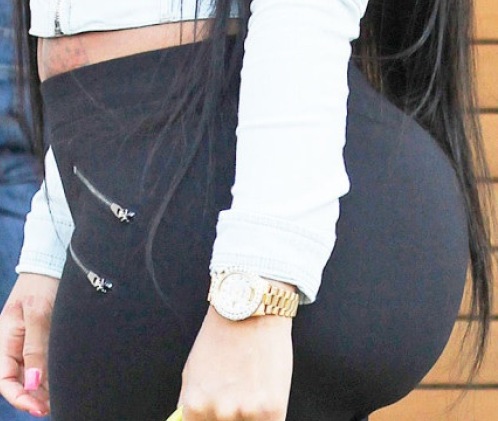 Ok, seriously? How can you even sit on that?! If she were to twerk with that thing??? Someone would get hurt! Plus, I’m fairly certain it would mess up her back. If this trend keeps up, doctors will have to find a way to do Pap smears with women on their stomachs, because there’s no possible way anyone could lay flat on her back with that butt! Fix that problem Obama “Care”!!

Look, again, I’m not knocking anyone for having cosmetic surgery, but use some common sense! If I had the money there’s a few things I’d like to have done! However, I’m really not sure that God wants us doing things like that. He created us wonderfully and beautiful! While there’s a part of me (the vain part) that would go under the knife in a heartbeat to look younger and skinnier, there’s also a part of me (that I keep trying to shove down) that thinks God just wants us to be happy with who we are; and that we are to realize that true beauty comes from inside. What’s on the outside is going to fade eventually, no matter what we do! I know this. I’ll never listen to “I Like Big Butts” the same ever again!

Charm can mislead and beauty soon fades. The woman to be admired and praised is the woman who lives in the Fear-of-God. Proverbs 31:30