Ok. So, once again I must say, I have a whole new respect for my friends, Sabrina and Tina, who have adult, autistic children. As long as I’ve been around them they’ve always seemed to be worried about what their boys might say or do. I would tell them that they were worrying for nothing. That, if anyone was offended, by something one of them might say, it was those ignorant people’s problems. They’d tell me that I didn’t really understand. I thought I did, but I didn’t. Now? I have an inkling!

For instance, the other day I’m in the phone with someone from The Victims of Violent Crimes, they’ve never asked for a copy of my power of attorney, but now they were. Or, they said that if my son was there, he could tell them it was ok for me to speak with them. Indeed he was here, however, he was half asleep. Naturally, Tucker’s not a morning person. Never has been. Now, he’s even worse! Especially if you wake him before say, 11am. It’s very common for TBI patients to not sleep at night and want to sleep all day. I thought I’d give it a try anyway since my fax machine wasn’t working. I told him that he needed to tell this person that it was ok for me to speak with them on his behalf. He snatched the phone. Apparently they started asking him lots of questions. Someone asking Tucker a bunch of questions is also something real Tucker hates. They were asking him what his SS number was, because he’d given them the wrong one in the hospital. He promptly bit the woman’s head off and told her that she (as if it were her) shouldn’t have asked him that question while he was “out of it” in the hospital, that she should’ve waited until he was to himself. Reluctantly, he huffed out a couple more yeses and nos, then sighed loudly, as if to say “clearly I’m disgusted by you,” then cut her off and said, “look, I’m giving the phone back to my mom. I don’t care if you talk to her.” Relief rushed through my body as he was handing me the phone. I’ve never been so glad for a conversation to be over! Much to my surprise, the conversation wasn’t over! At least not for TBI Tucker! As he was handing me the phone, he hiked up his leg, held the phone next to his rump, and FARTED! Seriously. He farted in the phone. Then rolled right on over and went right on back to sleep. Bitter doesn’t even begin to describe how I felt! 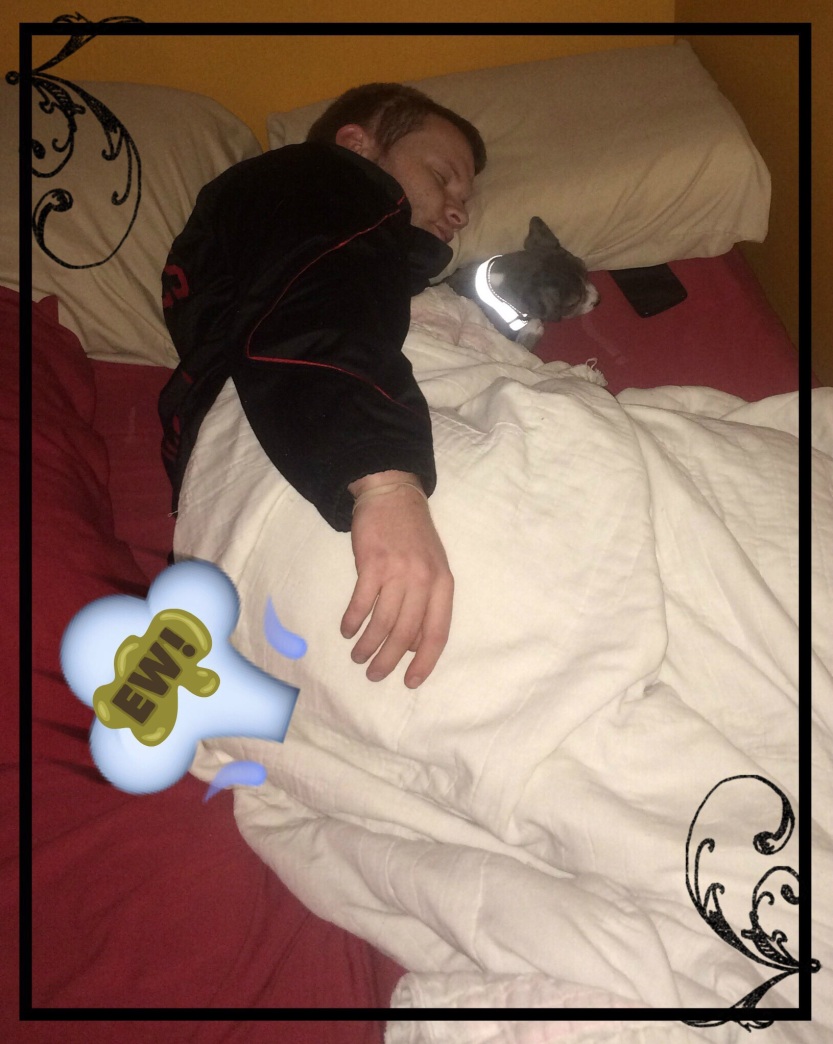 It was one of those things that seemed to happen in slow motion. I’m hoping, maybe she didn’t hear it because, when I realized why he was hiking his leg, I started trying to grab the phone. However, just in case she did hear it, I profusely apologized for his rude behavior, and said, “thus the reason I have POA.” She chuckled. I was seething.

For those of you who may know Tuck, you may be thinking to yourselves that that behavior is not so out of character, and toward some of you, it might not be! Clearly, real Tucker would do that to the people he loves! Duh! Who wouldn’t? However, he would never do that to someone he didn’t know! Especially a grown up! Like I tell everyone, “Tucker’s going to get better! If I don’t kill him first.” 🙂 Later, we mentioned how rude he’d been. He was like, “What? When? I wasn’t rude!” Are you kidding me?!

Again, those of you who’ve dealt with this type of thing for years, I have a whole, new kind of respect for y’all! Seriously, y’all have got to be great parents to do what you do and maintain your sanity. It seems like I’ve been a basket case since we’ve been home! Forgetting things. Forgetting customers! Misplacing things. You name it. I’ve screwed it up. Oh well. This too shall pass! Like the gas that passed through Tucker’s colon, then out his rear end!

How do you know what your life will be like tomorrow? Your life is like the morning fog (or an ill-intended morning fart)—it’s here a little while, then it’s gone. James 4:14