There could be some of y’all out there who wonders why I share about our son, Tucker, so much. I mean, I realize there are parents out there who talk about their children so much, you’d just as soon shove bamboo under your fingernails than to have a conversation with them. I hope I’m not that person! It’s not like I’m rambling on and on about what a perfect son he is, or pretending that we’re super parents! I’m fairly certain I’ve made it clear that this family is about as dysfunctional as any you’ll ever see!

I share for several different reasons. I share because it offers hope to other jacked up families! You know, the families who started out with more junk than the city dump? The families who didn’t remotely seek the Lord when they were picking a mate, but later found God, and are trying their best to do what’s right, but they’re still having to deal with all the crap they brought with them? Yeah, those families! I share because it gives parents, or husbands and wives, or aunts and uncles, or friends of addicts hope! It lets them know that there is a light at the end of the tunnel, and that light is Jesus! I share because it gives hope to the person who struggles with addiction! Addiction can happen to anyone! And it’s a demon you can’t fight alone! Don’t think, for one minute, the devil doesn’t use the things we keep secret to destroy us! Oh he does! That being said, I’m ready to share now! After y’all look at this pic! 🙂

I’ve written before about our friend Josh. Josh is a grown man who is, as his mother says, autistic and some change! He’s a very caring young man, with a keen sense of humor. He’s very friendly, and to say he never meets a stranger is a gross understatement. Whatever you do, don’t let his quirky ways fool you! He’s very smart! He decided that Tucker would love to see him, so he went with us on our Sunday visit. And oh what a visit it was!

There was a time, when Tucker wasn’t real Tucker, that he might not have been so nice to someone like Josh, but real Tucker? He has a heart for the underdog! He had a ball with Josh! Introducing him to his friends, joking around with him, making him feel like he belonged. And just let me tell you, even though those guys know that Tucker would seriously hurt someone if they mistreated Josh, or anyone like him, those guys chose to love Josh! And yes, I realize we were at a drug rehab! Yes, I realize these guys are addicts! Well, read this really carefully, and don’t forget it! Some of these guys have been the underdog! They know what it’s like to be kicked when you’re down! They’ve decided to allow God to work in them, to change them! You don’t get more humble than a person God has reached down and pulled up from the pits!!! These are people who are as good as any other person! Let me tell y’all, I’ve seen a lot of church people who wouldn’t treat Josh with anywhere near the love that this group of addicts did! And let me say this. Shame on you if that’s you!

I’ve thought about that visit all week! How they engaged Josh in their conversations, and didn’t make fun of him. 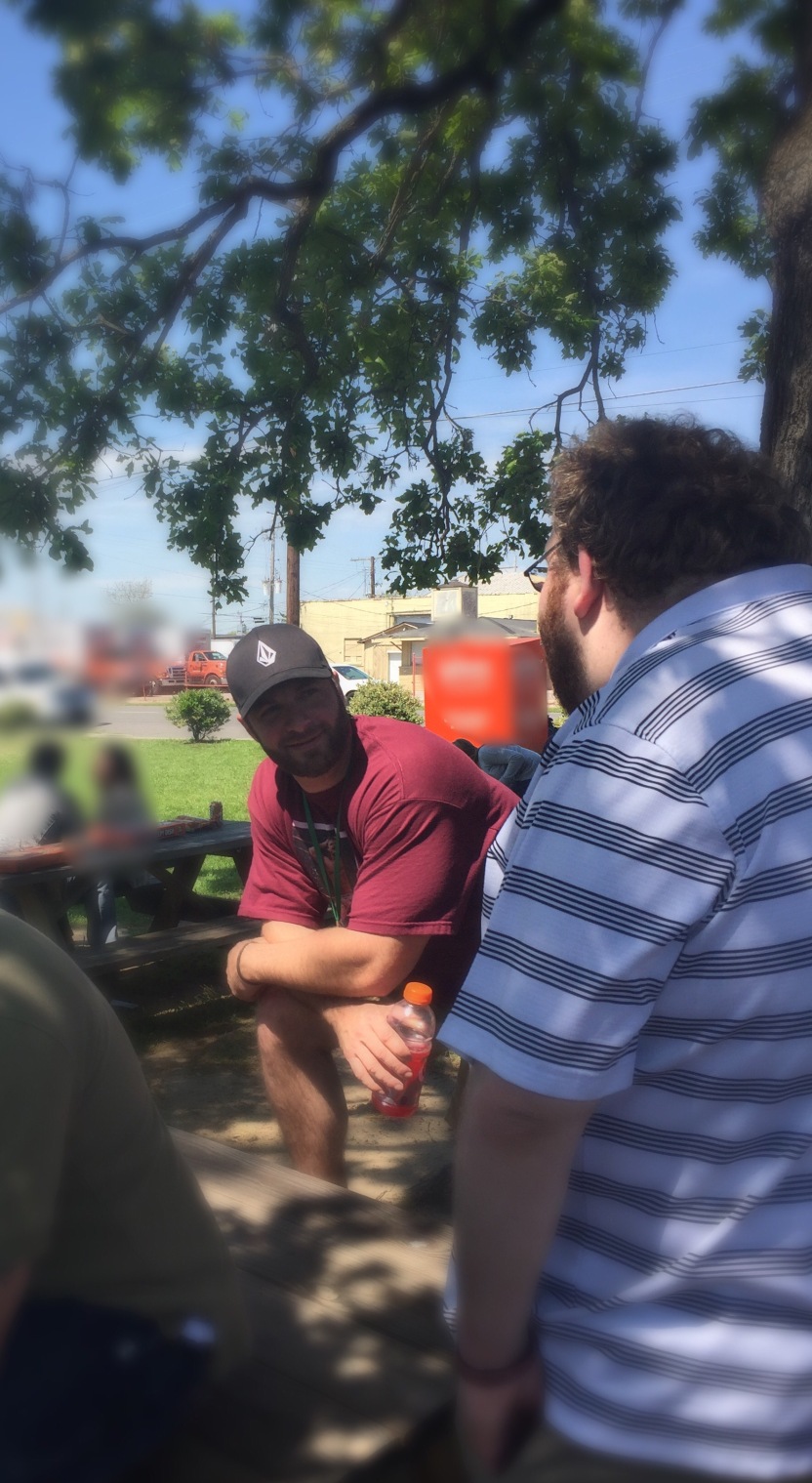 Don’t get me wrong, they definitely laughed at him! It’s hard not to! For one thing, when Josh gets tickled about something, everyone laughs! And trust me, he got tickled a lot! Those guys are always saying things that guys find funny. Moms, not so much! I wish I’d made more pictures, but I was too busy trying to get Josh to stop eating everything in sight! 🙂

Look, everyone wants to feel like they belong! And maybe, with someone like Josh, it’s easy to see that he might not fit the mold, so to speak, but here’s the deal. Feeling like we don’t belong, is why we all sin isn’t it? We all, at some point, feel that we just don’t quite fit in. I mean, people drink and do drugs to be accepted by their peers right? Young girls (and guys too really) have sex because they want to fill a void, or because they don’t think they’re worth waiting for. No one, and I mean no one truly feels as if they belong, until they know who they are in Christ! So, when we see people who just don’t seem to act right, maybe it’s because they don’t yet know who they are in Christ! And if we, as Christians, make them feel as if they don’t belong, we really need to check our motives! And if we find ourselves being judgemental of someone who’s caught up in sin, we’d better back the heck up! Look, no one is too far gone for God to reach, and even if we haven’t done the things they’ve done, we’re no better!! We could really learn a lesson from these guys in rehab! Men who’s lives have been (and are being) changed by the Creator of the universe! The one, true GOD!

Make allowance for each other’s faults, and forgive anyone who offends you. Remember, the Lord forgave you, so you must forgive others. Above all, clothe yourselves with love, which binds us all together in perfect harmony. And let the peace that comes from Christ rule in your hearts. For as members of one body you are called to live in peace. And always be thankful. Collisions 3:13-15