Y’all, God is so good ain’t He? He knows exactly what we need, exactly when we need it. When He tells us to do something, even when it’s scary and difficult,  it’s always the best thing to do! You can’t go wrong being obedient to Christ! I’ll have to admit though, when it comes to God’s children, I’m probably the slowest, and most stubborn one of them all!

When He told me to lead the Love And Respect bible study, I argued with Him. I didn’t want to do it because I’m allergic to work. For the love! He knows that! He created me for crying out loud! Not to mention, it’s a very difficult study…especially for the women! All this respect stuff is a hard thing to understand! At least it was for me! And who would be in this bible study?!? Marriage studies are private and personal, and the group has to be able to trust each other! I didn’t announce the group at church, and I told God that if He sent the right couples, Steve and I would lead this study. After I’d made all the excuses I could think of, God put two couples, who were perfect for the class, right in my lap, figuratively speaking of course. He lined everything up perfectly, thus stopping all my excuses.

I normally don’t use anyone’s real names, but I don’t think either of these couples will mind. Tim and Kim, and Brian and Sherry were the couples God put together for my group. They’re both young couples, but at very different stages of marriage. Tim and Kim have been married over 10 years, and Brian and Sherry have been married less than a year. Here’s a nugget of truth about marriage. It really doesn’t matter how long you’ve been married, if you don’t understand a few basic concepts about men, women and marriage; and how God specifically designed them, there’s not enough love in the world to make your marriage great! Don’t believe me? Ask God! And let me be clear. When I say married couples, I’m referring to men and women, not men and men, or women and women. Just in case there’s any confusion.

One night we happened to be discussing one of the greatest gifts God bestowed on married couples…..sexual intercourse! The author pointed out how that humans are the only species who have intercourse facing each other. I know, I know! No comments please! Anyway, Brian and Sherry, who are obviously the more inquisitive of the two couples, weren’t quite sure if that was a true statement, so…..they googled. They just knew that monkeys, being so much like humans, had sex facing each other. Google is a swell invention. Any information you could ever need is right there at your finger tips! According to what they discovered, not one species of animal, not even monkeys have sex facing each other!

An interesting tidbit of information indeed! However, I was a bit disturbed by something.  The two of them seemed to have really enjoyed watching the two monkeys relate to each other! They seemingly recalled every, single detail of how it happened. I say seemingly because I personally, have never sat and watched monkeys have sex! They were grinning from ear to ear, and moved uncomfortably close to one another as they recapped the story. When I noticed that Tim, Kim and Steve also looked uncomfortable, I quickly changed the subject, to avoid any further uncomfortableness, and moved on with the study. We all awkwardly laughed of course, I mean, that’s what people do in an uncomfortable situation, right? But still, there was an underlying, uncomfortable feeling in the air. 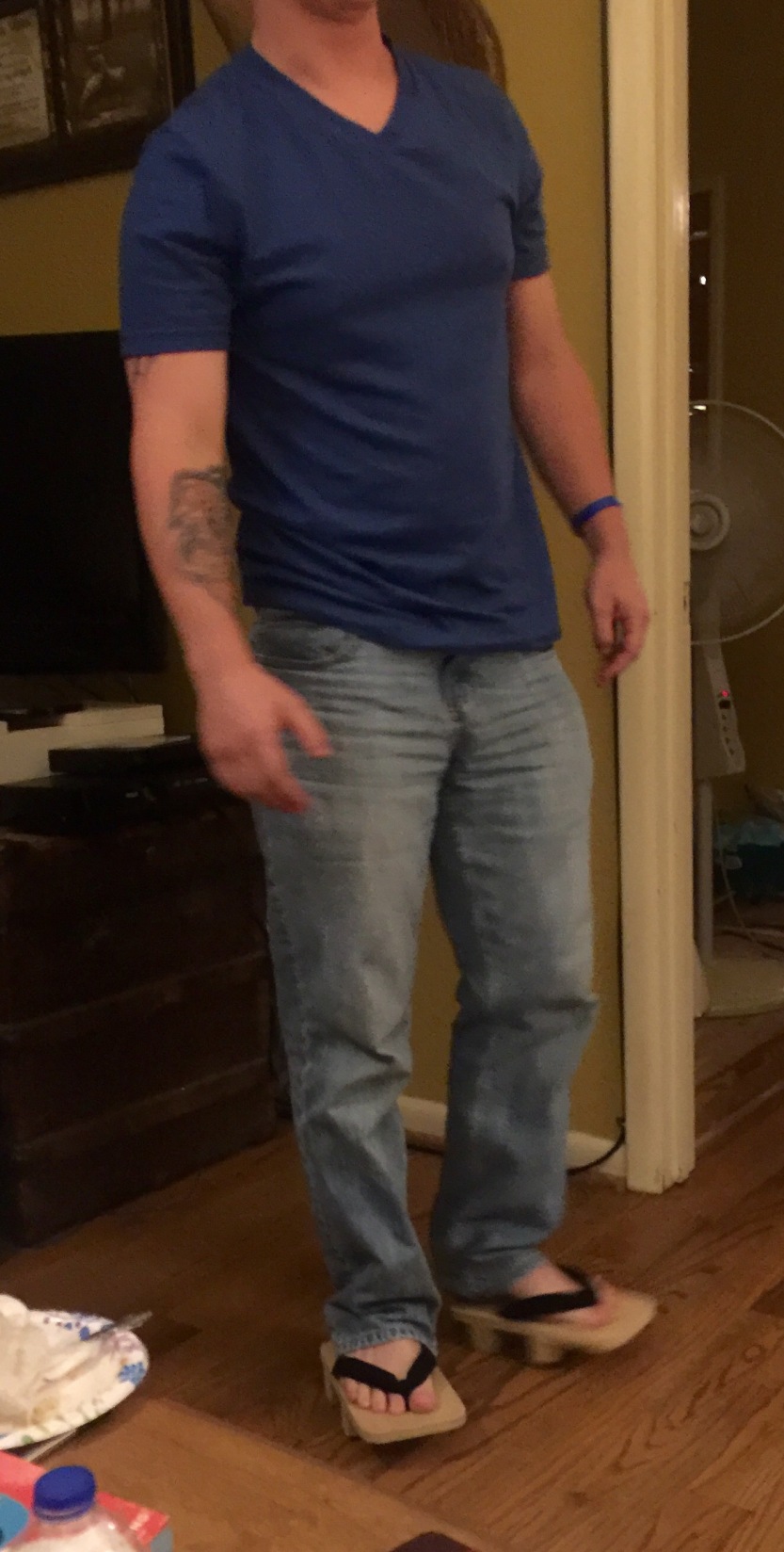 I figured it was best not to show his face. All I can say is that a picture is worth a thousand words! From the looks of this picture, he thoroughly enjoys wearing women’s shoes!

Ok, so obviously I may have exaggerated a few details in this blog. Brian and Sherry didn’t really enjoy watching the monkeys have sex as much as I may have eluded. And no one was shocked by the fact that they googled, and watched the monkeys having sex. It was actually interesting and hilarious! And I don’t think they were turned on by watching them, but I honestly can’t say that with positive certainty. But the Chinese flip flops? I’m pretty positive Brian was loving those! How does all this funny stuff point to God you may ask. Well, I’m about to tell y’all!

Y’all, we can’t do life alone! EVER! If you think you can, you’re missing one of the biggest truths about human beings and life! God created us to interact with others. And if you’ll listen and watch, He’ll put the exact people you need, right smack dab up in the middle of your life, right when you need them! He’s done that for me so much lately! And not just with this bible study, but just in general! I’m so thankful for the people God has specifically placed in my life, and in the lives of my family!  Friends that God puts together are the best!!!

Two people are better than one. When two people work together, they get more work done. If one person falls, the other person can reach out to help. But those who are alone when they fall have no one to help them. Ecclesiastes 4:9-10

Iron sharpens iron, and one man sharpens another. Proverbs 27:17