Hey y’all! Long time no write! Eh. It’s been one of those couple of weeks! Oh, I don’t have a proofreader this morning so, as always, ask the Holy Spirit to help you read this the way it’s supposed to be read. 🙂

Yesterday was the two year anniversary of our son’s TBI. Here’s my Facebook post from yesterday. “Today marks two years that cowardly thugs stalked, snuck up on our son, beat him and left him for dead….BUT GOD! What those evil people meant to destroy, God has used for His glory! We may never know the truth about what happened that night but, that doesn’t stop God from doing what He does! I know this though! There are those who DO know the whole truth and God WILL deal with them! To us, it seems unfair that our sons life was altered forever, yet those people walk around free; but like I said, God WILL deal with them! The great part is, Tucker is thriving! The sad part is, those people are wandering around lost :-(. I pray that justice is served…aka PLENTY of jail time, and in that jail time they find Jesus! Y’all have a great day and please join me in praying that the WHOLE truth come out and that justice is served!! God is good! Thanks in advance for the prayers!”

I had been calling the DA for two weeks, with no call back. To say I was getting frustrated was an understatement. After two years, it’s starting to feel as if Tucker is being forgotten about! That’s not going to happen! Tucker has paid the price for his crimes, and I expect those people to do the same! I will see to it that they’re punished to the max!

I don’t talk about the frustrations, I experience from this mess, very often but yesterday was a bad day for me. Just let me say that the things I go through are nothing compared to what Tucker has to go through on a daily basis. He’s a much better person than I am most of the time! Anyway, there are times when I get so paranoid. For instance, while I was at the store yesterday I saw this guy. I felt as if he was looking at me funny, and I wondered to myself if he was one of those guys who was there the night Tucker was attacked, and quite possibly in on the attack. Like I said, we don’t know the real truth. If I know that someone knows those people, I wonder if they have an agenda in talking to me. I get paranoid in sharing Tucker’s story with strangers because I don’t know who all knows Eric Winters (the guy who hunted Tucker down and cowardly attacked him) or any of the guys who were with him. I wasn’t going to say his name but who cares. If I knew all the other guys’ names off the top of my head I’d include those too. I have their names, I just can’t remember them. Anyway, you just wonder and think so many things. I wonder how many lies were told to cover up things. The list goes on. I seriously can’t imagine how Tucker must feel.

I know all these feelings I’m having are attacks from the enemy. Any time a person is trying to do what God is telling them to do, the devil tries any way he can to stop them. Let me tell y’all, I have been under attack the past few days! It seriously sucks! He’s attacking the ministry I’m trying to get started, he’s attacking me emotionally, he’s attacking me spiritually… he’s attacking me in every way possible! I know this though; he won’t win!!! Greater is He who is in me than he who is in the world! *John 4:4. God’s will will be done, no matter what, or who, tries to stand in the way! He always wins! 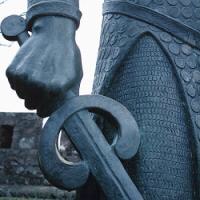 My sweet friend, Amy, sent me this verse yesterday, and it was so appropriate! Y’all, we can trust God to be our defender! Psalm 7:11-17, 11 says, “God is an honest judge. He is angry with the wicked every day. If a person does not repent, God will sharpen his sword; he will bend and string his bow. He will prepare his deadly weapons and shoot his flaming arrows. The wicked conceive evil; they are pregnant with trouble and give birth to lies. They dig a deep pit to trap others,then fall into it themselves. The trouble they make for others backfires on them. The violence they plan falls on their own heads.”​

​Look, if you’ve been done wrong? God has your back! He’s our shield and our defender! I’m talking to myself here, but don’t worry if it doesn’t turn out the way you expected! The guilty never go unpunished. And remember, God didn’t create us to be doormats! Its ok to get mad. Just don’t sin in your anger. (Oops. That’s where I tend to screw up!) It’s ok to stand up for ourselves and to fight back! Especially spiritually speaking! We fight with prayer! We fight with God’s Word! We can always stand up for what we believe and for those we love. And we can do it with confidence knowing that God is on our side!