I promised I would tell some funny things that happened during our hospital stay. TBI is definitely NO laughing matter. However, at some point, it’s either laugh or cry. I don’t know about you but, I prefer laughing!

While Tucker was still on the ventilator, and doped up on propofol, he’d wake up every once in a while, and occasionally do something funny like, attempt to dance when I played Safety Dance in his ear. That kind of stuff made us think that when he woke up , he’d be the same ol’ Tucker. WRONG!! All I know is propofol, obviously, made Tucker nice!

As they were weaning him off the meds, we saw glimpses of the Tucker we referred to as the angry elf. I’ve told y’all how he ‘F-you’d’, ‘G-D’d’, and showed off his knowledge of sign language to everyone who entered his room. He didn’t do this quietly either! He yelled at the top of his lungs! Of course, Tucker never has had a very good inside voice. The first morning of enduring such vulgarity, I cried my eyes out, wondering what the heck was going on! Don’t get me wrong, I’m not foolish enough to think Tucker has never used such language; but the ‘real‘ Tucker would never treat doctors, nurses, and especially his family and friends like that! Even though they would assure me that behavior was normal for TBI patients, still I would ask almost every nurse or doc who came in, and had to endure such rude, obscene outbursts. Once I got it through my thick skull that this was a result of him not being well, it then became humorous. One of the funniest things was when he got to take his first shower.

After what seemed like an eternity of him begging to take a shower, he finally got his request granted. Not because the occupational therapist had come to give him a shower, but because when she got him up out of the bed, he all but ran to the bathroom, stripping off his gown. He hen turned the water on, and started getting in! She looked at me and said, ” I guess we’re taking a shower!”

It was a handicap, walk-in shower with a seat and handheld nozzle. When he sprayed himself with that warm water, you’d thought something much more exciting was taking place in there! I mean, from the sound of things, that was the best feeling shower a person had ever felt! He commenced to carrying on, and although it was funny , this momma was embarrassed! Warning! The next sentence contains graphic language. “Sh*t! Ah sh*t! Aw man! Sh*t!” I decided I’d step out. That sweet young lady, who was merely trying to keep Tucker from soaking his incision, would open the curtain and tell him to stop wetting his head. “F’ man! Stop opening the F’in’ curtain!” She would sweetly explain what she was trying to do, and tried not to burst out laughing. I, on the other hand, was outside the door busting a gut! Needless to say, he did fairly well with OT.

After the shower, it was like a fog was lifted. He didn’t cuss anyone else out, or yell at anyone. I’m not saying he didn’t get frustrated, but he seemed to have much better control over his anger. For the first time, we were able to have a, somewhat real, conversation with our boy! The tears started flowing again.

Now, if you see him out and he says something inappropriate, or something that doesn’t make sense, please just be patient with him. His ability to think, and process what others say, is much slower than it is for the rest of us. He may show the wrong emotion, or react weird, and he’s, sometimes, not really friendly; again, this is the temporary new normal. Please don’t take anything personally! He might not understand jokes or sarcasm either. Just FYI. That’s really strange considering his genetic make up!

This is going to be a crazy, sad, funny, emotional, sometimes trying journey. I know though, that God will never leave or forsake us! 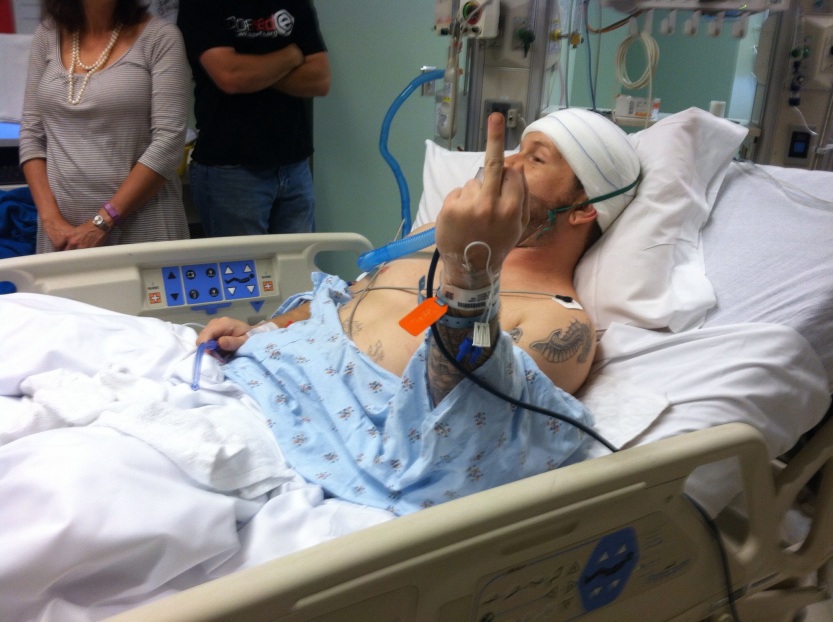 ‘Do not fear, for I am with you; Do not anxiously look about you, for I am your God. I will strengthen you, surely I will help you, Surely I will uphold you with My righteous right hand.’ Isaiah 41:10

3 thoughts on “Will The Real Tucker Hawkins Please Stand Up?”